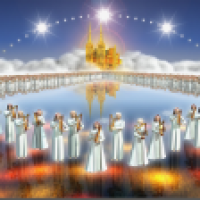 JESUS CHRIST ON HIS THRONE

Rom_5:10  For if, when we were enemies, we were reconciled to God by the death of his Son, much more, being reconciled, we shall be saved by his life.

2Co_5:20  Now then we are ambassadors for Christ, as though God did beseech you by us: we pray you in Christ’s stead, be ye reconciled to God.

Sin Separates Mankind from GOD. When Adam Sinned he became Carnal , Corrupted and Defiled which is the Antithesis of Spiritual and Holy. These two Oppositional States are at Variance. Consequently Mankind became Spiritually Dead in Sin and Separated from GOD.  Man was Exiled from the Garden of Eden and from the Presence of GOD. He was no longer in Unity or in >> Oneness with GOD, << or At-One with GOD.

The Carnal Man can not discern the Spiritual things of GOD because his Mind is blinded by the devil, the god of the World of Darkness and he is deceived by the >> Carnal Deception  1 – 6 <<  which are Lies,  Illusions and Delusions the devil uses to beguile and control the Carnal Mind of Man.

2Co_4:4  In whom the god of this world hath blinded the minds of them which believe not, lest the light of the glorious gospel of Christ, who is the image of God, should shine unto them.

The >> Ordained Works Performed by CHRIST JESUS << was for the Atonement and the Reconciliation of Mankind to GOD.  In Theology, it is the Expiation of Sin made by the Perfect Obedience and Personal Sufferings of JESUS CHRIST as the Recompense to the Divine Law of GOD. The >> Perfect Obedience  of JESUS CHRIST << and HIS Perfect Sacrifice was a Facet of the Efficacious Blood Atonement (At-one-ment) required to bring Mankind back into the >>  Relationship << of  Oneness with GOD the FATHER. It was for the Remission of Sin.

It was the only >> WAY to Effect << Reconciliation between Man to GOD. It was Effected through the Instrumentality of the COVENANTS which are recorded throughout the Bible. The Bible, which is the Inspired and Written Word of GOD, is Presented and Delineated Line upon Line and Precept upon Precept for the Instruction, Edification and Admonishment of Mankind.

The Mysteries of GOD

Each step of Mankind’s Progress was known by GOD before the Foundation of the WORLD. The Mysteries of GOD are Revealed to Mankind in Dispensations according to GOD’S Timetable.

Eph 3:9  And to make all men see what is the fellowship of the mystery, which from the beginning of the world hath been hid in God, who created all things by Jesus Christ:
Eph 3:10  To the intent that now unto the principalities and powers in heavenly places might be known by the church the manifold wisdom of God,
Eph 3:11  According to the eternal purpose which he purposed in Christ Jesus our Lord.

JESUS CHRIST was sent to Earth By The FATHER to:

Rev 1:5  And from Jesus Christ, who is the faithful witness, and the first begotten of the dead, and the prince of the kings of the earth. Unto him that loved us, and washed us from our sins in his own blood,

Rev 1:6  And hath made us kings and priests unto God and his Father; to him be glory and dominion for ever and ever. Amen.

The above list is just the tip of the iceberg. See the Blog article – >> The Eternal Works of JESUS CHRIST << for a Compendium of HIS Eternal Works, Titles, and Appellations with applicable Scriptures.

In HIS Acceptable Time the Mystery of GOD, HIS Divine Plan and the Grand Design, is going to be Finished as GOD has declared to HIS Prophets.

1Co_2:7  But we speak the wisdom of God in a mystery, even the hidden wisdom, which God ordained before the world unto our glory:

Eph_3:9  And to make all men see what is the fellowship of the mystery, which from the beginning of the world hath been hid in God, who created all things by Jesus Christ:

Rev_10:7  But in the days of the voice of the seventh angel, when he shall begin to sound, the mystery of God should be finished, as he hath declared to his servants the prophets.

It is through Faith in JESUS CHRIST that Believers/Over-comers may Enter into Life Eternal. HE is the Firstborn of the Dead through HIS Resurrection. HE is the First-fruits of the Race of “Spiritual Mankind” Born of the Spirit of GOD.  HIS Ascension in HIS Glorified Body, as Witnessed by HIS Disciples and Apostles at HIS Ascension, is the Emblematic Future for all of HIS People, HIS Spiritual Church.

Act 1:8  But ye shall receive power, after that the Holy Ghost is come upon you: and ye shall be witnesses unto me both in Jerusalem, and in all Judaea, and in Samaria, and unto the uttermost part of the earth.
Act 1:9  And when he had spoken these things, while they beheld, he was taken up; and a cloud received him out of their sight.

Act_1:22  Beginning from the baptism of John, unto that same day that he was taken up from us, must one be ordained to be a witness with us of his resurrection.

C5 - THE PERSON OF YESHUA JESUS

CHRISTOLOGY SERIES - YOUR QUESTIONS ~ THE BIBLE'S RESPONSE ~ FOR PRECEPT MUST BE UPON PRECEPT ~ PRECEPT UPON PRECEPT - LINE UPON LINE... Isaiah 28:10

1Pe 2:9  But ye are a chosen generation, a royal priesthood, an holy nation, a peculiar people; that ye should shew forth the praises of him who hath called you out of darkness into his marvellous light:

SPHERES OF THE COSMOS

IN MY FATHER'S HOUSE THERE ARE MANY MANSIONS JOHN 14:2

CHRISTOLOGY SERIES - THE SPIRITUAL CHURCH ~ 1Corinthians 6:19 What? know ye not that your body is the temple of the Holy Ghost which is in you, which ye have of God, and ye are not your own?

BE AN AMBASSADOR FOR CHRIST. 2Co 5:20 Now then we are ambassadors for Christ, as though God did beseech you by us: we pray you in Christ's stead, be ye reconciled to God.

CHRISTOLOGY SERIES & GROUPS EXTENDING THE HAND OF FELLOWSHIP ACROSS THE NETWORKS AND AROUND THE EARTH!

THE HISTORY OF THE BIBLE

CHRISTOLOGY SERIES Luke 18:1 ...and HE spake a parable unto them to this end, that men ought always to pray, and not faint.

THE SPHERES OF CHRIST

THE OTHER BOOKS OF THE BIBLE

THE APOCRYPHAL BOOKS OF THE BIBLE

CHRISTOLOGY SERIES - ANGELOLOGY | Heb 1:6  And again, when he bringeth in the firstbegotten into the world, he saith, And let all the angels of God worship him.

THE PARABLE OF CHRIST

THE CHRISTOLOGY SERIES - Mat_13:35 That it might be fulfilled which was spoken by the prophet, saying, I will open my mouth in parables; I will utter things which have been kept secret from the foundation of the world.

DIVINE COSMIC WILL OF YHVH GOD

CHRISTOLOGY SERIES - THE GODHEAD - THE FATHER, THE SON & THE HOLY GHOST /SPIRIT | GOD'S DIVINE WILL THROUGH THE COVENANTS

CHRISTOLOGY SERIES - SPIRITUAL GUIDEPOSTS FOR YOU DURING YOUR SPIRITUAL JOURNEY

THE DIVINITY & DEITY OF YESHUA JESUS - THE WORD

THINKING WITH MY FINGERS

CHRISTOLOGY SERIES - John 1:1 In the beginning was the Word, and the Word was with God, and the Word was God. Joh 1:2 The same was in the beginning with God. Joh 1:3 All things were made by him; and without him was not any thing made that was made. Joh 1:4 In him was life; and the life was the light of men. Joh 1:5 And the light shineth in darkness; and the darkness comprehended it not.

THE FELLOWHIP OF THE MYSTERY - YHVH GOD'S Divine Cosmic Law of Love is a System of Spiritual Principles Which Regulate & Govern The Kingdom of Heaven of Which Earth, the Cosmos/Universe and Mankind are a Part.

WHAT IS A CHRISTIAN? & WHAT IS A DISCIPLE OF JESUS THE CHRIST?

THE CHRISTOLOGY SERIES - THE NEW COVENANT

CHRISTOLOGY SERIES - THE FATHER ~ THE CHRIST & THE HOLY GHOST/HOLY SPIRIT IN THE COVENANTS | GOD created Covenants as an unchangeable, Divinely imposed Legal Agreement between HIMSELF and Mankind that Stipulates the Conditions of their Relationship.